Giuliana Furci's presentation Women in Mycology is now available to MST members to watch on the meetings video page. 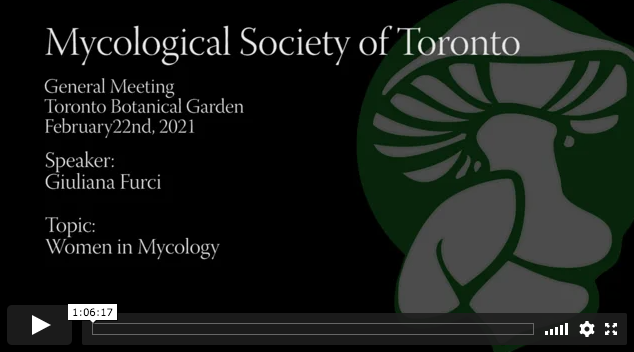 Giuliana discusses and explores the contributions of women as botanists and then later as mycologists, as the field of mycology separated from botany. With the recognition of fungi as a Kingdom in their own right, women have increasingly taken on a fundamental role in contributions to the field, across all continents. Giuliana takes us on a journey to learn about the women who have shaped mycology as it is today.

Giuliana is the first female mycologist of non-lichenized mushrooms in Chile, and the CEO and founder of the Fungi Foundation, the first NGO dedicated to Fungi in the world. Through her work with the Foundation she has been able to promote the Fungi Kingdom and under her leadership Chile became the first country in the world to include the Fungi Kingdom in its environmental legislation. Chilean funga is now included in the study and evaluation of environmental impacts throughout the country, through its incorporation into the Law of General Bases of the Environment, also mandating its incorporation into the national inventory of species, among other obligations.

Giuliana Furci has published and collaborated extensively. She has published Field Guides Fungi of Chile, volumes 1 and 2. She is co-author of titles such as “State of the World's Fungi” by Royal Botanic Gardens, Kew, “Biodiversity of Chile, Heritage and Challenges” by the Ministry of the Environment of Chile, and the book “Fantastic Fungi” by Louie Schwartzberg & Paul Stamets, among others.

Giuliana is the curator of the FFCL Fungarium, which is continuously studied in collaboration with experts from Harvard University, Conicet Argentina, University of Florida, and other institutions.