The MST's Field Species Checklist is the main tool used at our forays to keep track of which species have been identified that day. Originally developed in 1998 and revised in 2007, the checklist has been newly revised in 2021 by MST Education Chair Pat Burchell and former Secretary and Editor Tony Wright, in order to bring it up to date with current taxonomy.

A note on spring species in the 2021 checklist

Of particular interest for the spring mushroom season are the changes for morels. We have known for a long time that North American species of morels are not identical to their European counterparts, but continued to use the European names for want of any clear alternatives. A number of NA species have now been described, but the difficulty is in knowing which of a number of different species we actually have here. We decided to list the only 3 species described in Baroni’s book; i.e. one species of yellow morel, one species of black morel and the NA half-free morel.

Wherever the species name on the checklist has changed, the name formerly used has been provided in brackets; e.g. Dacrymyces chrysospermus (D. palmatus), the orange jelly fungus. 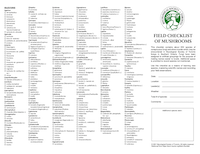