Stella Tracy died on February 18, 2015, but she will be fondly remembered by many MST members. Stella joined the Mycological Society of Toronto in 1977, and was one of only a few members still active in the Society who joined MST during its early years. Stella was Membership Secretary and then Membership Director from 1994-2013, and she also served as webmaster from 2001-2013.

For many people, Stella was their first contact in MST, either through mail or email, or in person as she greeted people at our meetings. She was a regular attendee at the Cain Foray in years past, and helped to organize the Fungi Fair, an event which MST held following the Cain Foray for more than 20 years. In recent years, ill health made it increasingly difficult for her to participate in MST activities, but we will always be grateful for her many contributions to the Society over the years, as a member of the Board, through the website, at the Cain Foray, and at meetings and other events.

The speaker for the March 16th meeting will be Bruno Pretto of Mycosource Inc. Bruno will be presenting on Mushroom Cultivation on Hardwood Logs.

Mycosource specializes in spawn production for the cultivation of shiitake and oyster mushrooms on hardwood logs. They endeavor to act as an educational enterprise for the dissemination of products and information about mushrooms and mushroom cultivation as part of a diversified and sustainable forest ecosystem.

Jan Thornhill’s presentation The Big World of Tiny Ascomycetes is now available to MST members to watch on the meetings video page. 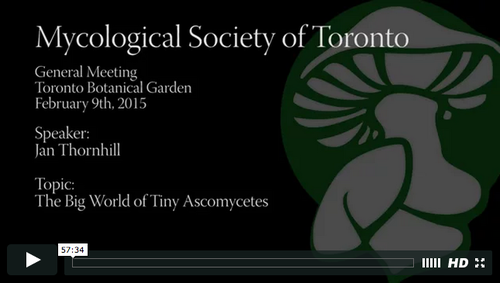 Jan Thornhill is a writer, photographer, amateur mycologist, and prolific blogger. While her books aim to make nature accessible to young audiences, her blog Weird and Wonderful Wild Mushrooms frequently features small and easily overlooked rarities. Her work is also frequently featured in the Mycelium, the MST’s quarterly newsletter.

For MST members who are also members of NAMA: Ann Bornstein is departing as membership chair.

Steve Bichler is the incoming chair. Ann has provided a postal address and telephone contact for Steve which has been omitted here for privacy. Steve's email address is available at NAMA's contact page