As part of the MST's membership in the Myco-Consortium series of Zoom talks, MST members are invited to join the presentation on Friday, Februrary 18th at 7pm:

A Mycocentric View of the Wood Wide Web

We recently heard Suzanne Simard discuss her revolutionary finding that the trees in the forest are connected to each other by a fungal web, and that they are sharing nutrients and more via that web. But how is that web formed? What is really happening as different fungal species interact with different trees' roots and with each other? What sorts of recognition and movement are going on underground? The mycorrhizal network is behaving in ways that are surprisingly complex, and this complexity is rarely referred to — probably because it's microscopic, underground and difficult to decode. While Suzanne was figuring out the web by feeding labelled CO2 to the leaves of trees, Tom was working on identifying the fungi at the roots of trees. The opportunity to hear both talks will give us a rare and valuable top-to-bottom view of the wood wide web. 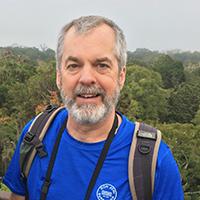 After getting his BA at Humboldt State University, Tom went on to get an MA in Ecology & Systematics at San Francisco State U, where he investigated the role of mycorrhizal fungi associated with chaparral plants facilitating Douglas-fir establishment. Dr. Tom Parker, a plant ecologist was his main advisor, but he was lucky to also work closely with Dr. Harry Thiers and Dr. Dennis Desjardin. Continuing to work with eminent mycologists, he got his PhD at UC Berkeley with Tom Bruns, focusing on the use of molecular tools to investigate underground ectomycorrhizal communities. He did his post-doc at Oregon State U. under Drs. Randy Molina and Jim Trappe, continuing to study mycorrhizal fungi and plant dynamics. He is now a professor at SUNY Syracuse where his projects follow his general interest in knowing how the life history of ectomycorrhizal fungi influence plant succession and plant community dynamics in general.