Dr. Larry Peterson grew up in Alberta and attended the University of Alberta where he received B.Ed and M.Sc degrees. He earned a PhD from the University of California and spent his career at the University of Guelph where he is currently a University Professor Emeritus. He has published over 200 papers in refereed journals, 25 book chapters, and has co-authored 3 books. The book Teaching Plant Anatomy Through Creative Laboratory Exercises, co-authored with Dr. Carol Peterson and Lewis Melville, received the George Lawson Medal from the Canadian Botanical Association (CBA) for an exceptional contribution to Botany. His current book When is a "Flower" not a Flower and other Intriguing Questions about Plants is co-authored with Dr. Carol Peterson. Dr. Peterson received a second George Lawson Medal from CBA for outstanding career contributions to Botany. He is a Fellow of the Royal Society of Canada and has received two Teaching Awards from the University of Guelph.

Copies of When is a "Flower" not a Flower will be on sale for $25 (cash or cheque only).

This unique full-colour book by award-winning authors takes common observations of plants and presents scientific explanations for them that the non-specialist can understand. Using a question-and-answer format, 140 questions are posed, and each is followed by an answer illustrated with beautiful macroscopic and/or microscopic images. A total of 450 images are included. In addition to the general public, gardeners, horticulturalists, naturalists, teachers, and students will enjoy this book. More information is available at petersonbook.com.

Tom Nagy is an enthusiastic encyclopedia of ethnobotanical knowledge and traditional foraging skills who graduated from Sir Sanford Fleming College where he studied Ecosystem Management and Ecology. Tom delivers passionate and engaging edible & medicinal plant walks as well as courses and workshops on growing fungi, using herbal medicine, fermentation, holistic methods of food production and how to strengthen ecological systems to a broad spectrum of audiences. He lives, loves, educates and grows food and community in Hamilton, Ontario.

MST Movie Night! We'll be screening a 2008 documentary by Canadian director Ron Mann called Know Your Mushrooms. Come and have some popcorn! 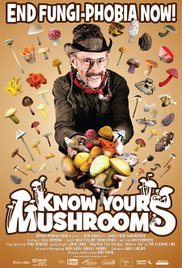 Award-winning filmmaker Ron Mann (Grass, Comic Book Confidential) investigates the miraculous world of fungi with this documentary shot largely at the Telluride Mushroom Festival in Colorado. It was during a conversation with his friend Jim Jarmusch that Mann first learned of the bizarre sub-culture surrounding the mushroom, and once his interest was peaked there was no turning back. Some of the oldest and largest living organisms on the planet are fungi, but where did mushrooms come from, and could they hold secrets that we've yet to discover? Recently, a new breed of maverick scientists have made the claim that mushrooms possess the power to cleanse sites corroded by toxins, and that they could be used as a "clean" pesticide among other things. By traveling to the Telluride Mushroom Festival and speaking with festival president Gary Lincoff, as well as numerous other mycophiles (mushroom aficionados) who frequent the event, Mann reveals why the popular fungus has emerged to become one of our greatest mysteries. A neo-psychedelic soundtrack by The Flaming Lips and campy clips from such features as Attack of the Mushroom People keeps the mood whimsical as Mann explores every wonderful facet of the mushroom kingdom.

Presentation: A Painless Introduction to Polypores

At the AGM, the business of the previous year is reviewed, resolutions for the upcoming year are decided, and MST members elect the incoming Board of Directors. All members have a voice and a vote - so if you're interested in influencing the activities and the future direction of the MST, please attend!